A seven-segment display or 7-seg display is a kind of semiconductor light-emitting device that is cheap and easy to use. By inputting relative current to its different pins to make it light up, it can show that the numbers can display all the parameters that can be represented by numbers, such as time, date, temperature, and so on. 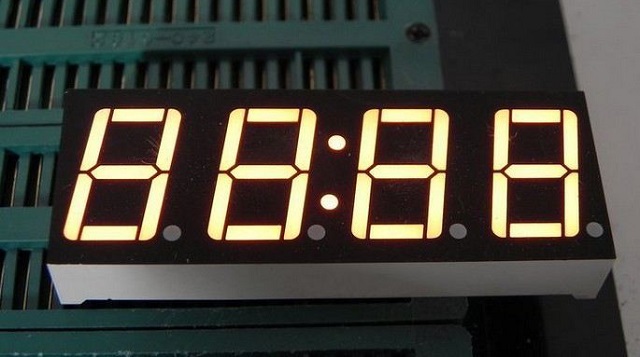 LED Segment Displays is an "8"-shaped device encapsulated by multiple light-emitting diodes. The leads have been connected internally, and they only need to draw out their individual strokes and common electrodes. The number of segments commonly used for led segment displays is generally 7 segments, some plus a decimal point, and the other is similar to the 3-digit "+1" type. There are half digits, 1, 2, 3, 4, 5, 6, 8, 10, and so on. The appearance structure of the seven-segment display is shown in the figure below. 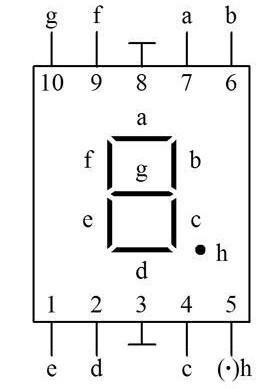 The general seven-segment display has seven light-emitting diodes (three horizontal and four vertical) to display decimal numbers from 0 to 9 plus a decimal point. It can also display English letters, including English A to F in hexadecimal (b, d is lowercase, others are uppercase). At present, most of the seven-segment displays will be displayed in italics.

In addition to the seven-segment display, there are also displays with additional diagonal strokes such as fourteen and sixteen strokes. However, due to the drop in the price of dot matrix displays, these "multiple strokes" have basically been replaced. 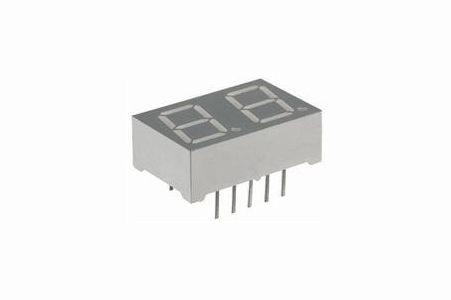 Understanding these characteristics of LEDs is very important for programming because different types of seven-segment displays have different programming methods in addition to their hardware circuits. Their light-emitting principles are the same, but their power supply polarities are different. The colors are red, green, blue, yellow, etc. Instruments, clocks, stations, home appliances, and other items all employ LED seven-segment displays. When choosing a product, consider the size, color, power consumption, brightness, wavelength, and other factors.

The static drive is also called DC drive. Static drive means that each segment code of each seven-segment display is driven by an I/O port of a single-chip microcomputer, or driven by decoding using a binary-decimal decoder such as a BCD code. The advantage of static driving is simple programming and high display brightness. The disadvantage is that it occupies a lot of I/O ports. If driving 5 seven-segment display static displays, 5×8=40 I/O ports are needed to drive. You must know that an 89S51 single-chip microcomputer is available. There are only 32 I/O ports. In actual application, a decoder driver must be added for driving, which increases the complexity of the hardware circuit.

In the alternate display process, the lighting time of each seven-segment display is 1~2ms. Due to the persistence of human vision and the afterglow effect of light-emitting diodes, although the seven-segment displays are not actually lit at the same time, as long as the scanning speed is sufficiently fast, it gives the impression that a set of stable display data will not flicker. The effect of dynamic display is the same as that of static display, which can save a lot of I/O ports and lower power consumption.

Seven-segment displays are one type of display screen. By inputting relative currents to different pins, it will make it light up, thus showing that the numbers can display all the parameters that can be represented by numbers, such as time, date, temperature, and so on.

Since the light-emitting diode is basically a current-sensitive device, its forward voltage drop has a great dispersion and is also related to temperature. In order to ensure that the seven-segment display has a good brightness uniformity, it needs to have a constant working current. And it cannot be affected by temperature and other factors. In addition, when the temperature changes, the driver chip must be able to automatically adjust the output current to achieve color balance temperature compensation.

In addition, the very large-scale integrated circuits we use also have cascaded delay switching characteristics, which can prevent the damage of the reverse peak voltage to the light-emitting diodes. The VLSI also has a thermal protection function, which can be automatically shut down when the temperature of any one exceeds a certain value, and the fault display can be seen in the control room.

There are two major factors that affect the consistency: one is the selection of the raw material chips used, and the other is the control method adopted when using the seven-segment display.

How to divide common cathode and common anode?

Find common cathode and common anode: First, we find a power supply (3 to 5 volts) and a 1K (a few hundred ohms) resistors, VCC is connected in series with a resistor, and GND is connected to any 2 pins. There are many combinations, but there is always one LED that will emit light. It is enough to find one, then GND does not move, and VCC (string resistor) touches the remaining pins one by one. If there are multiple LEDs (usually 8), Then it is a common cathode.

What is a Projector?
What is Visible Light Communication(VLC)?